You may recall technology entrepreneur and trail runner, Scott Dunlap‘s review of the 2017 BSFM Ultramarathon (see “The Biofreeze San Francisco Marathon 52.4 Mile Ultra – Two Sides Of A Great City”: Part I and Part II). Scott tackled the ultra again this year, and WON! Check out his entertaining race recap below!

Last Saturday, I had the great pleasure of joining ~100 ultrarunners for the two-sided fun of the 2018 Biofreeze San Francisco Double Marathon. I say “two sided” because this race has a unique way of showing you two completely different views of this great city while essentially being the exact same course. How, you ask? Well, you start with the first loop of the SF Marathon course in reverse at 11pm, among full traffic and drunken partygoers, then after a short break, take over the city with [over] 23,000 runners for the official SF Marathon at 5:30am. Same course, but two wildly different experiences! 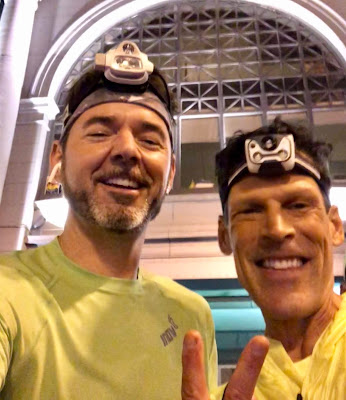 Me with Dean Karnazes, the man who started this crazy race

Dean Karnazes has invited me to this run for years, when it started as an unofficial double with his Krazy friends. In 2015, it was “legitimized” as an official race option and has grown in participation ever since. I ran it last year for the first time and instantly understood why so many runners came back year after year. There’s nothing quite like it. 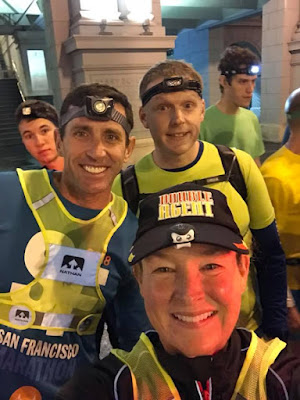 Claire Gladstone poses at the start, photo courtesy of Claire 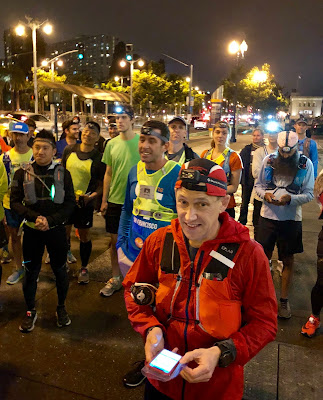 This guy was crazy enough to pace the 4:55 group on the second marathon. Now that’s confidence! 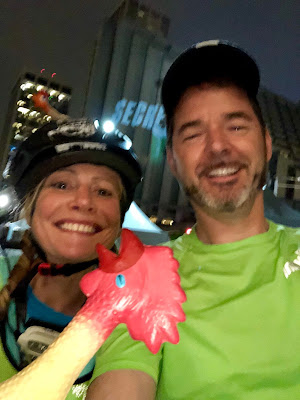 I watched the sun set as I drove up, parking near the Ferry Building with more than enough time to suit up and get ready. Dean came running up the start just in time to hear Race Director Lauri Abrahamsen and Course Director Michael Li give us final instructions (Dean had run 18 miles to the start from his house in Marin, as one does). As we crossed the street to the start area, the SFPD had a completely naked man cuffed and face down on the pavement…welcome to the city! We swapped hellos with other runners, and found out there was a pretty good mix of returning athletes, first timers, and a handful trying their first ultra. The weather was an ideal 57 degrees, so with a hoot and holler, Lauri sent us off down the Embarcadero. 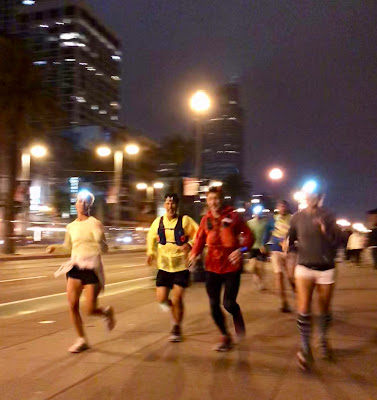 Carlsbad, CA’s Stefan Asbock (3rd here last year) set a blistering sub-7 min/mile pace and was soon out of sight, while the rest of us snapped pics of the Bay Bridge and grouped up by pace. My legs wanted to go fast, so within a few miles I was running solo, the RunGo app whispering turn-by-turn directions into my ear as I watched for Stefan in the distance.

By mile 3, I caught up to Stefan and we paired up through the Dogpatch and Mission districts. The streets were not blocked off, so it helped to have two headlights to part the sea of revelers on the busy sidewalks. We stuck together through the Haight district, where the cannabis smoke hung in the air with delicious intensity. I hope the aid station is coming soon, I’m getting hungry! But like a total wannabe stoner, I obliviously went right by the aid station.

The mobile aid station takes care of us, photo courtesy of Michael Li

Stefan did find the mobile aid station, so I headed through Golden Gate Park by myself. The nocturnal animals lurked everywhere in the fog, including deer, coyote, and what looked like a family of skunks (run away!). A pack of rats devoured a garbage bag so quickly it looked like the bag was rolling down the street, right up until an owl swooped down and picked a squeaking rat from the pack, scattering the rest to the sewers. I’m so glad I did this race – how else would I see the wild side of Park life? 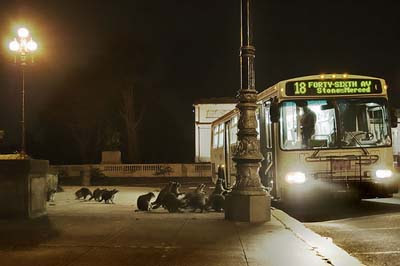 I refueled at the second mobile aid station (mile 10), with Stefan coming in just as I headed out along the Great Highway. A quick two mile out and back, and we were giving high fives to fellow ultrarunners as we worked back through Golden Gate Park and towards the Presidio. The city was dead quiet, the streets filled only with the sounds and shadows of my solo running (a great zombie-apocalypse kind of moment). I caught a cool breeze heading up the climb to Baker Beach, and knocked on the window of the mobile aid station minivan (mile 20) where Janeth Siva and Ed Lui got me filled up. They confirmed I was well ahead of schedule (surprise!), and sent me under the bridge. 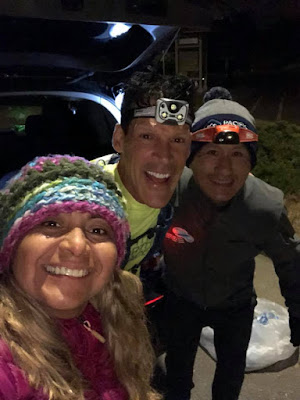 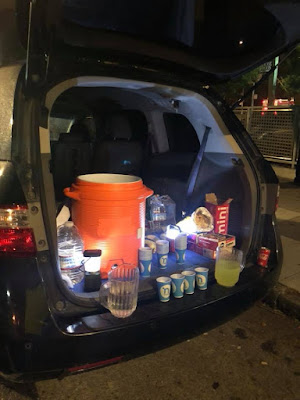 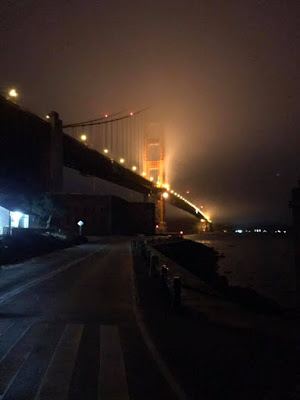 Another coyote tracked along with me through Crissy Field, tag teaming with one more who followed me to Ghirardelli Square. Local escorts! I had no idea coyotes were so plentiful here. Fisherman’s Wharf was, much like last year, the most rats I have ever seen in one place (and a guarantee I’ll never eat at that restaurant). Before long, I reached the finish (3:14:16) and got a fresh meal and clothes.

I had about a three hour gap before the next marathon started, and spent most of that time eating, drinking, stretching, and moving around. I had learned from last year that taking a nap was a sure way to lock up your legs, so best to stay at it! Stefan (3:33, and with the best post-race chocolate) and Kevin Cochrane (3:49, although with an extra mile, so technically our first ultramarathoner) came in soon after me, and then a steady stream of runners shedding their headlamps and tights for sunscreen and shorts. Round two would begin soon enough! 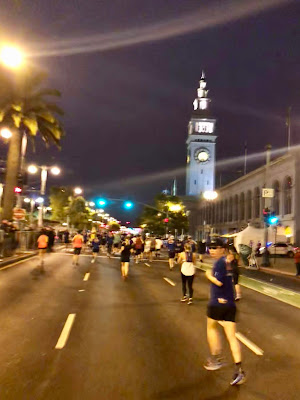 At 4:15am, I peaked my head out to the start line and saw nobody. Forty-five minutes later, the Embarcadero was filled with 15,000 runners ready to go! I made it to Corral A just as it left the start area, and slowly warmed my legs up. One…more…lap!

Lots of company on this lap, with languages from all over the world. As the fog lifted to reveal the Golden Gate Bridge, there were just as many “Vunderbar!”s as “Formidable”s. We squeezed onto the sidewalk (no road closure on the bridge this year), cheering Jorge Maravilla (1st), Alex Varner (4th), and Michael Wardian (10th) as they returned on the other side. There was a fun dirt fire road to get under the bridge this year, and some more trail from the bridge to Hwy 1…trail running rules! 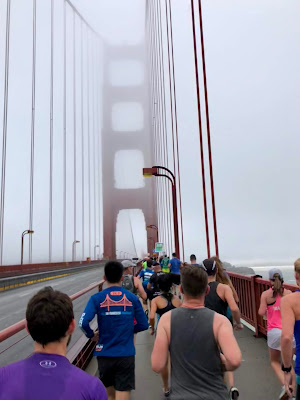 The Golden Gate Bridge in daytime! 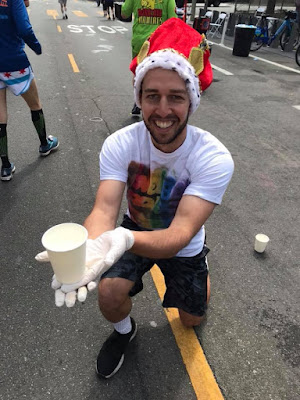 Once we hit Haight Street, most of us knew the climbing parts were over. Although only 1,200 feet of climbing in total, San Fran has a way to dishing it out swiftly and painfully. I rallied with a few hungry marathoners through the final miles, grateful that the clouds never really broke enough to make it hot. I cruised in to the finish in 3:28 or so, feeling good, but ready for some breakfast. 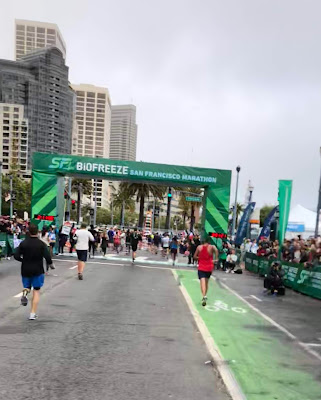 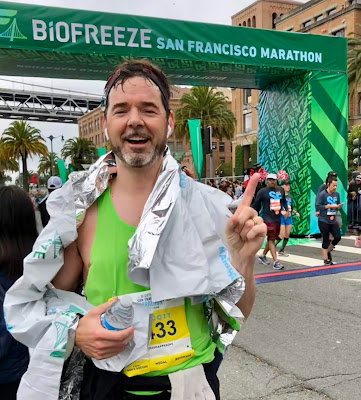 The first to greet me as a volunteer saying “congratulations…you won the double!”. I was shocked, by both the win and that they could pick me out of the crowd of finishers. He was happy to oblige my desire for pancakes with a VIP pass, where I got to catch up with repeat marathon winner Jorge Maravilla (and Joaquin!), Alex Varner, and sponsors from UCAN, Air France, and BioFreeze, other top finishers before heading to the stage for our awards. This race is so official now! The pomp was a lot of fun though. 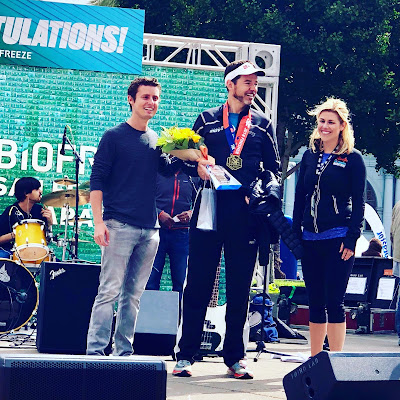 On stage for the awards 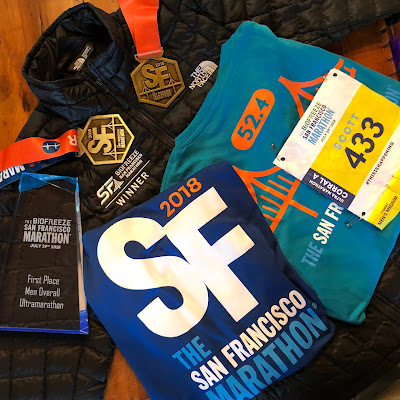 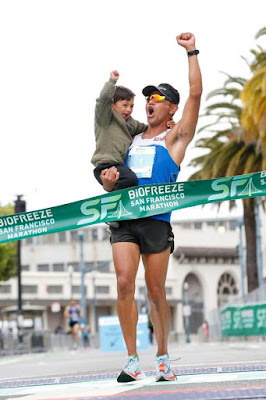 Jorge Maravilla for the victory!

Once again, a fantastic race experience, and I am already eager to try it again! My thanks to Lauri, Michael, and their ultra crew for helping keep this special ultra alive and thriving, and to Dean for scheming it up in the first place. I hope to see you again soon!

Also a special thanks to inov-8 (kick ass shoes), injinji (52.4 miles and no blisters says it all), and my sponsors for keeping my training on track!

No Replies to "Race Recap: Victory at the 2018 San Francisco Double Marathon"