Embracing the California Side and ALL the Challenges

Kara Ruecker is a 2016 San Francisco Marathon Ambassador and endurance athlete who has set out to complete more races in California this year, including completion of the SF/Berkeley Challenge. Her personal blog is Run Bird Legs Run.

This year especially, I am very motivated to get back to racing. Having a 6 month break will do that for you.  When I originally thought about what I’d like my 2016 racing calendar to look like, I had three goals:

With those three goals in mind, The Biofreeze San Francisco Marathon was my first stop.  I’ve been wanting to run this race for all three years I’ve been in the city but it’s always conflicted with previous trips.  This year was going to be different.  I made the commitment in November and blocked it on my calendar.Tritreats and I have been talking about doing the Half It All Challenge for years so 2016 is gonna be the year I kicked it off.  Because I am type-A, naturally I’ll run the first half in 2016 and the second in 2017.  I’d love to do the full but 5 months post baby seemed a bit aggressive.  I’ve heard nothing but amazing things about this race from the November Project crew and everyone else I know who’s ran it. I can personally vouch for how amazing the city is, something those who attended the Superbowl festivities recently found out.  65 degrees in February and crystal clear? Yes please! 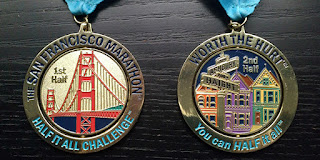 With CIM in mind as my end of year marathon, I knew I wanted one more local half to work into training.  In December MFR and I made a VERY rash/last min decision to buy a house and move to Berkeley – all of which happened in 14 days.  Could we be more of a cliche?  They say not to make big life decisions in your third trimester – whoops!  Pregnancy can cause you to do crazy things. Without even realizing it was happening,  as of January 2nd I became an East Bay’er.  When I came to, my first course of action was to immediately start researching local running groups and races. Childcare and all that boring stuff can wait.

I found the Berkeley Half on November 20th.  What better way to ingrain myself in a community? Plus it starts less than a mile from my new home and works with the CIM training schedule.  And any race that is the Sunday before Thanksgiving – the week where I inhale ALL the food and drinks – has my vote.  Since I’ve lived in Berkeley for over four whole weeks now, I am pretty much an expert and can tell you that this is an awesome running town.  There are runners EVERYWHERE.  The course covers the best parts of Berkeley plus some added views of the Bay so it was a done deal.  After that decision was already made, this magical unicorn appeared: 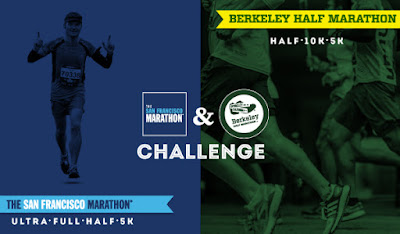 I love challenges, whether it’s completing all 12 legs of Hood To Coast, drinking all the top IPA’s, or traveling to all 50 states.  Like most endurance addicts, the bigger the challenge the better.  Anything to make me run further and faster.  It starts with an innocent sprint triathlon and before you know it you’ve spent thousands on gear and have an Ironman on your calendar.  I do better when I have a carrot to chase, so add some checkpoints and some extra bling, and I am there.  I’ve run many races because they are part of a challenge and I’ve never been disappointed.  I’ve done the Beach Cities Challenge, multiple Rock N’ Roll challenges and all the ones I make up myself.

If you live in the Bay Area or are looking for an excuse to visit, I highly recommend signing up for the SF/Berkeley challenge.  Two great cities, two great courses, three great medals and you can pick your poison for running lengths.  If you’re an avid runner, join me in the half marathon distance, if you’re just getting started there is a 5K option at both races or mix and match as you see fit. Put those resolutions to work before they fall apart on Sunday with Superbowl snacks.

The Road to the Loyal Runners Club

My Love of Running

No Replies to "Embracing the California Side and ALL the Challenges"